I’m very excited for today’s review because it is my first book subscription box! Around the time I signed up for Fandom of the Month club, I was considering trying out a YA book subscription box, and another one OwlCrate was top of my list. Unfortunately, they’ve had a wait list for the past few months that I have yet to get off of, so I decided to try out another one instead called Uppercase Box.

I went with the expert pick box, which costs $23 + $6 shipping, so $29 / month. This box, according to the website comes with a brand new, recently published YA book which will either be signed or include a signed bookplate, exclusive author content, an Uppercase interactive reading experience, and a fun book-related item or accessory.

Money is collected on the 1st of the month and the box ships out on the 15th with 2-day shipping, so mine actually got here yesterday but I wasn’t able to pick it up from the mail center until today.

I don’t want to spoil this month’s box for anyone who might still be waiting for their own to get here, so click on the read more to see what fun stuff was in this month’s box!

Once you open the initial packaging, this is what you will see: 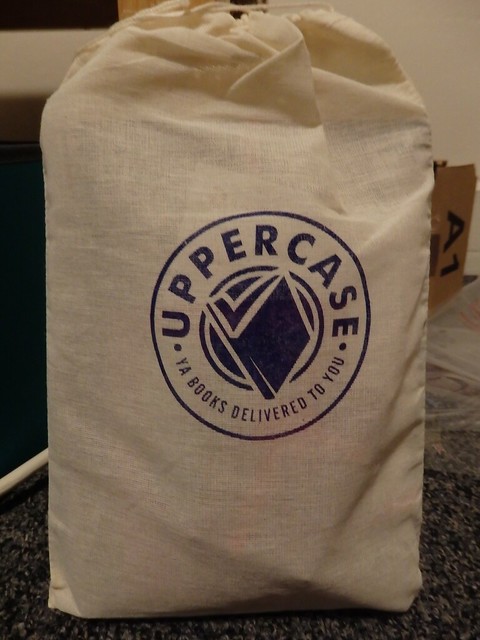 Something to know when if you get this subscription is that the curator includes a little letter with a handwritten note and a list of everything inside, so read that last unless you want to be spoiled. I wanted to know what book was inside first, so that was the first thing I pulled out. 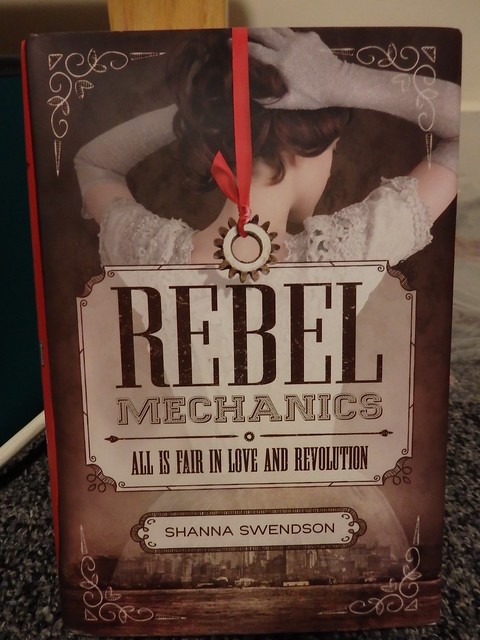 The book is Rebel Mechanics by Shanna Swendson. I was surprised that I hadn’t even heard of this book since I try to stay up to date with what is being published in the YA world. Here’s the description from and link to its Goodreads page:

A sixteen-year-old governess becomes a spy in this alternative U.S. history where the British control with magic and the colonists rebel by inventing.

It’s 1888, and sixteen-year-old Verity Newton lands a job in New York as a governess to a wealthy leading family—but she quickly learns that the family has big secrets. Magisters have always ruled the colonies, but now an underground society of mechanics and engineers are developing non-magical sources of power via steam engines that they hope will help them gain freedom from British rule. The family Verity works for is magister—but it seems like the children’s young guardian uncle is sympathetic to the rebel cause. As Verity falls for a charming rebel inventor and agrees to become a spy, she also becomes more and more enmeshed in the magister family’s life. She soon realizes she’s uniquely positioned to advance the cause—but to do so, she’ll have to reveal her own dangerous secret.

I am definitely a fan of the steampunk genre in general so I am so far very interested in this book. I tried not to read any reviews of the book on Goodreads because I saw a few low starred ones near the top and since I didn’t pick this book myself, I don’t want any negative impressions going into it. I’m definitely excited to read this book though. It seems like it is going to be the first in a series, and since the curator reads all the books that she chooses for this box, at least I know that she thought it was good enough to send out en mass to her subscription members.

There were actually two additional gifts in this month’s box, the first which was this set of two tattoos from Litographs. 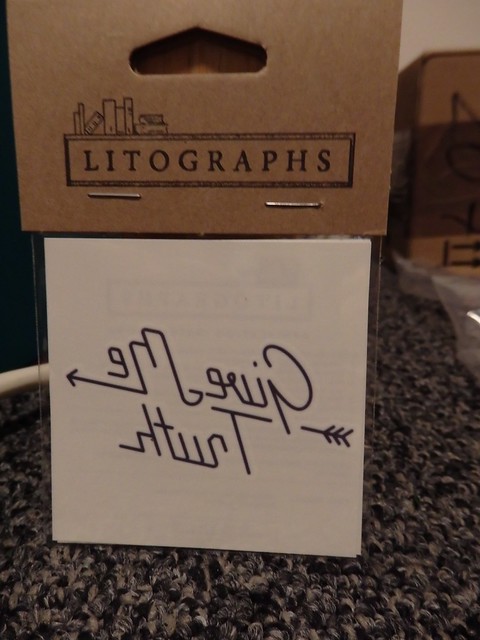 According to the link I found on the Litographs website, this quote “Give Me Truth” is from Walden by Henry David Thoreau. I’m not much of a temporary tattoo person but it’s still pretty cool.

The second additional gift though is much better in my opinion. It’s a beautiful little Rose Gold Ampersand necklace (which looks much prettier than my picture would suggest. I really need to get better at taking pictures indoors). 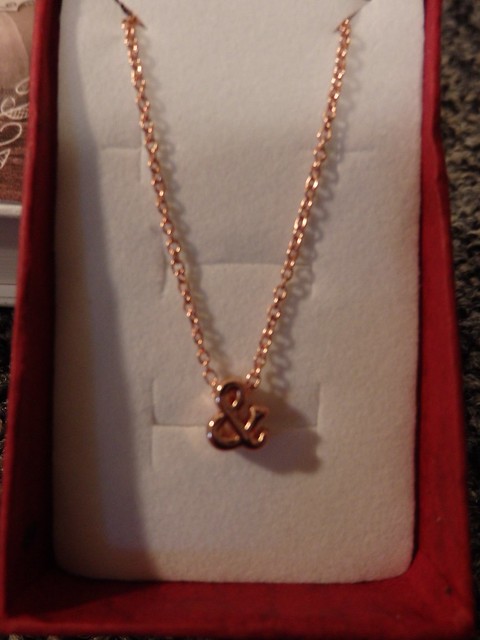 The necklace is small and cute and something that I definitely see myself wearing frequently, so I was very pleased by that.

There was actually also one more thing I totally forgot about until now. 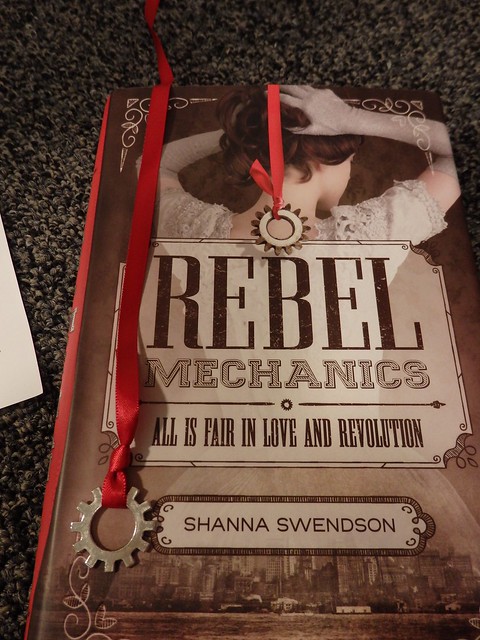 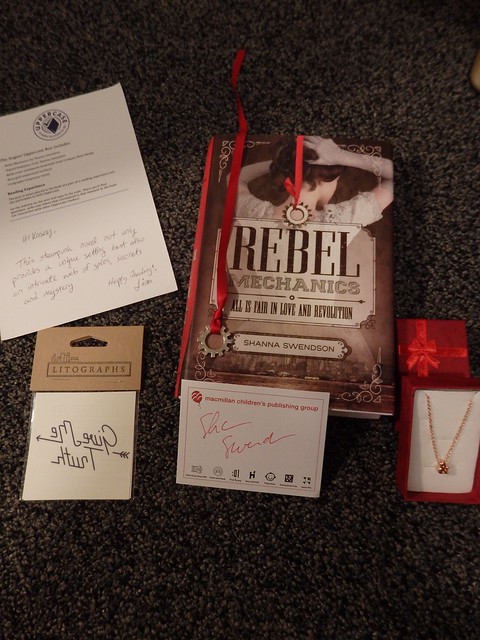 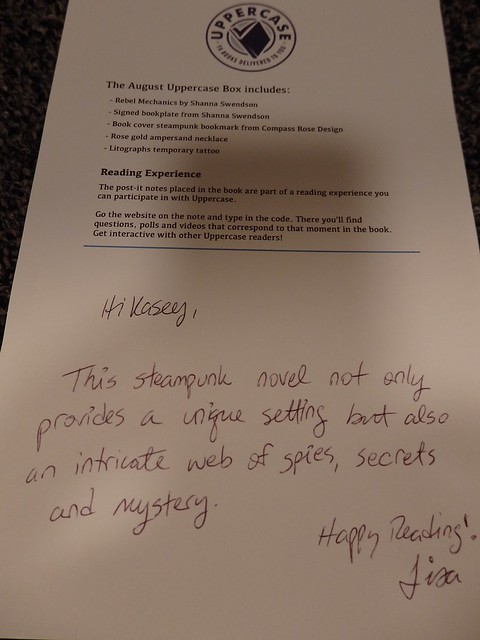 It says at the bottom:

This Steampunk novel not only provides a unique setting but also an intricate web of spies, secrets, and mystery.

It also includes as I mentioned earlier, a complete list of everything inside the package. If you also remember the beginning of my post, I mentioned this interactive reading experience thing. Inside the book, at the beginning and then at a few locations throughout, there are post it notes with a code on each one that you can input into the Uppercase website to apparently get access to polls or other additional stuff online. I haven’t started reading the book yet so I haven’t tried this out, but I will let you know probably in next month’s post what I think about that feature.

And yes, that’s right I did say next month’s post. I am so far pleased enough with this month’s box, and have liked what i’ve seen from past month’s boxes on their website to keep subscribing for now. I’m still hoping to get off the OwlCrate waitlist soon so that I can get one of those boxes and compare the two, but for now, I am definitely pleased by Uppercase.

The price point is a little high if you just think of it as paying almost $30 for a book you don’t even choose every month. But the extra goodies are nice, and I really like the surprise aspect of it, and the fact that the book has been personally chosen by someone who is clearly passionate about books and YA in particular. Also I really, really love the ampersand necklace, and am already excited to see what next month’s box will hold.

There are also 2 other options other than the expert one that I signed up for. The Book Exclusive option is $17 + $6 shipping ($23, or $6 less than Expert) and comes with everything except the exclusive related items (so probably no tattoos or necklace. Not sure if the bookmark would be out as well).

The other option is the Personalized option which is $29 + $6 shipping ($35, or $6 more than the Expert) and comes with a book personalized to your tastes and a note explaining why it was chosen but no exclusive author / book content or extra item at all. I think this is the worst option because for $35 you should probably just go pick out a book yourself.

I think that the extra stuff is half the fun anyways, so Expert definitely makes the most sense for me, and it is the most popular option that people tend to sign up for.

Do any of you subscribe to Uppercase or OwlCrate or anything similar? What are your thoughts on these book box subscriptions? Let me know!