Long time without a post, so I’m excited to change that tonight. A few months ago I heard that the Boston Science Museum was going to be hosting a temporary exhibit on the science of Pixar so of course I immediately freaked out and knew that I would be going to see it. I was able to go a couple of weeks ago with a friend of mine and it was absolutely amazing. But before I go into that (and share a few pictures!), let me just give you some info from the Museum of Science website.

So the exhibit is at the MoS from now until the beginning of January 2016, so if you’re in the area or thinking of visiting, there is still plenty of time to go. You can get a ticket online that includes admission to the main exhibit halls for $29 if you aren’t a member, although I think if you just want to see the Pixar exhibit you can buy a ticket at the museum for closer to $10 (don’t quote me on an exact number!). Members can buy a separate admission ticket for just $5.

During the day there are admission times every 10 to 30 minutes from 9:00 am to 5:30 pm, so there are plenty of chances to go if you decide to buy a ticket at the museum the day of. The basic setup of the exhibit is that you first watch a short introductory movie before being admitted to the main exhibit. The movie is just a quick tour of all the different parts of the animating process and their departments at Pixar.

Once you get into the main exhibit hall, you can stay in as long as you want — the website recommends about 75 minutes and I think my friend and I probably took about 90. Throughout the room are different areas dedicated to all the different segments of animating. Each area has a video monitor where you can watch some really interesting interviews with people who work for Pixar, and then usually an interactive part where you can play around with some of these things yourself.

There were of course, also plenty of larger than life figures of different Pixar characters. So let’s take a look at some of the pictures I took! 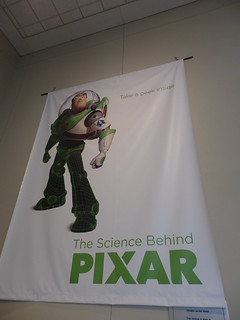 This is a banner hanging above the stairs to the exhibit hall. 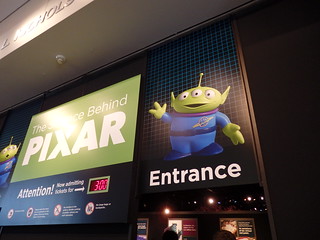 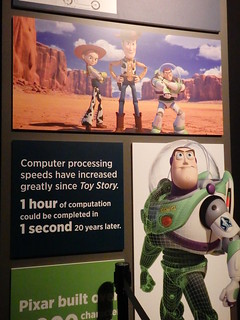 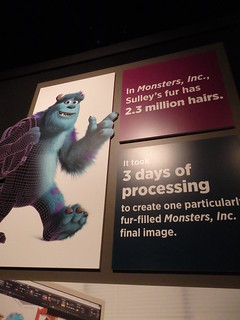 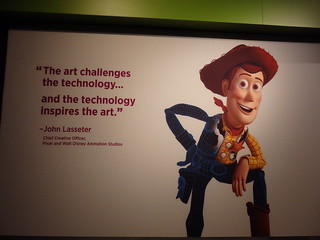 Here are a few of the signs in the waiting area where you stand in line before they let you in to see the film. 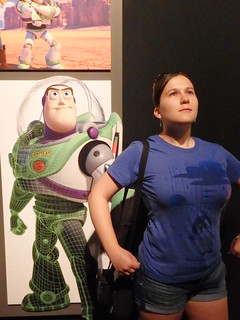 Do I look like Buzz? (I’m wearing an Inside Out Sadness shirt!)

END_OF_DOCUMENT_TOKEN_TO_BE_REPLACED

While I thought my next post was going to be about the four Disney Classic 2015 dolls I recently ordered, because of the holiday weekend, I won’t be able to get my package with the dolls until Monday. So if you are looking for that post, check back probably on Tuesday.

Today however, I will be reviewing the touring production of Newsies that is currently in Boston until tomorrow! I’ve wanted to see Newsies since I was in 8th grade and the high school marching band was doing music from Newsies for their Marching show. This was the year before I was able to join the marching band myself and I was obsessed with the band’s show that year. I went to probably all of the football games just to see their halftime show. So when I realized that Newsies was going to be in Boston this summer for a short period, I got a ticket to go see it. I was able to buy a discounted ticket through bostix.org, which I think was discounted because it was a left side orchestra seat with a very slightly impaired view — although honestly it was the best view I have ever had at the Boston Opera House. I could actually see the faces of the actors, which was great!

If you are unfamiliar with the Broadway show of Newsies or the Disney movie that it is based off of, both the show and the movie are based on the true story of the 1899 strike of the New York Newsboys. Back then, newspapers were sold to newsboys, often young children and teens, who would then sell them all around the city. It was a hard life with very long days. When Joseph Pulitzer of The World and William Randolph Hearst of The New York World raised their prices from 50¢ per 100 newspaper bundle to 60¢ / 100 papers, the newsboys went on strike, causing the circulation of The World to drop dramatically over a few weeks.

Newsies tells this story (with of course, some catchy songs, a charismatic leader, and an obligatory Romeo & Juliet-esque romance). 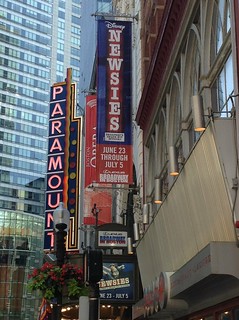 The Newsies banner outside of the Boston Opera House

Before I go into any specifics, I have to say that I ADORED this show. It had amazing and super catchy songs (check out my favorites — Carrying the Banner, The World Will Know, Seize the Day, Kings of New York, and my favorite of all, Once and For All). The choreography was incredible, which is unsurprising since Newsies won a Tony Award in 2012 for Best Choreography (and Best Original Score). A few of the really big cast numbers have some great choreography with large groups doing ballet moves, with some awesome spin things (can you tell I know nothing technical about dance?) and there were lots of backflips and other great acrobatic moves. 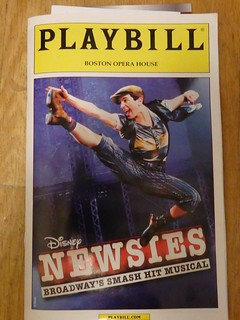